﻿When iron is dumped in the oceans.﻿

next page: Publications
Various experiments were carried out over time. An overview is needed to assess the extend of side effects and the trends underpinning the evolution of fertilisation trials.

What was the evolution of OIF Experiments?

The following table provides a syntethical overview of the experiments carried out in open ocean, be it by observation only (CROZEX, not referenced on the map), or direct ocean fertilisation trials. 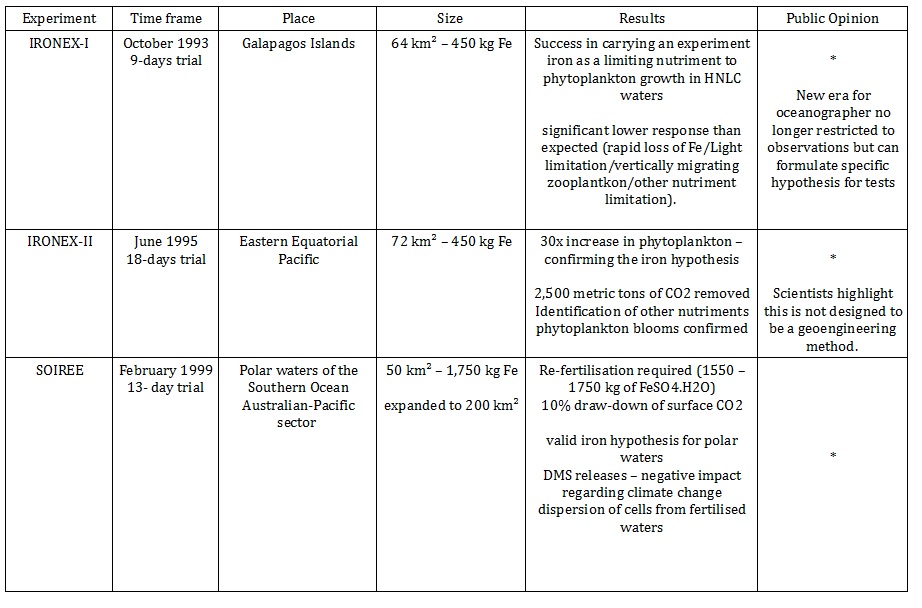 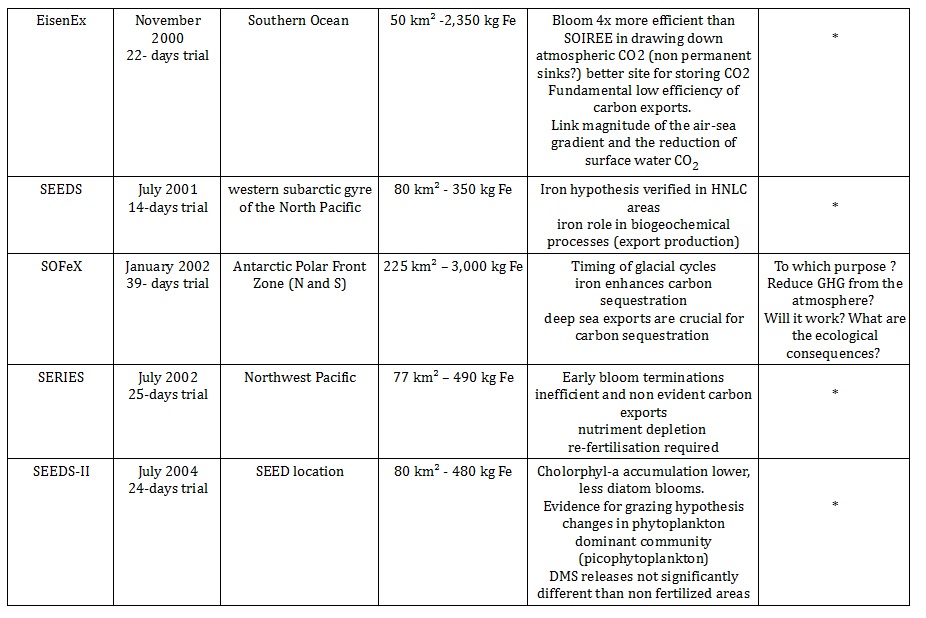 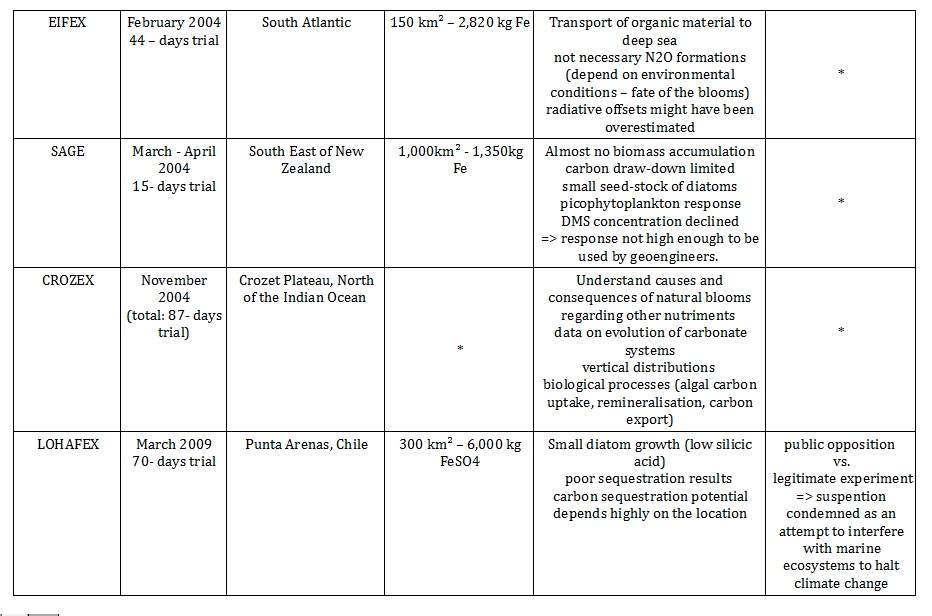 To make things clear, the following graphs were generated to have a better understanding of the present trends. 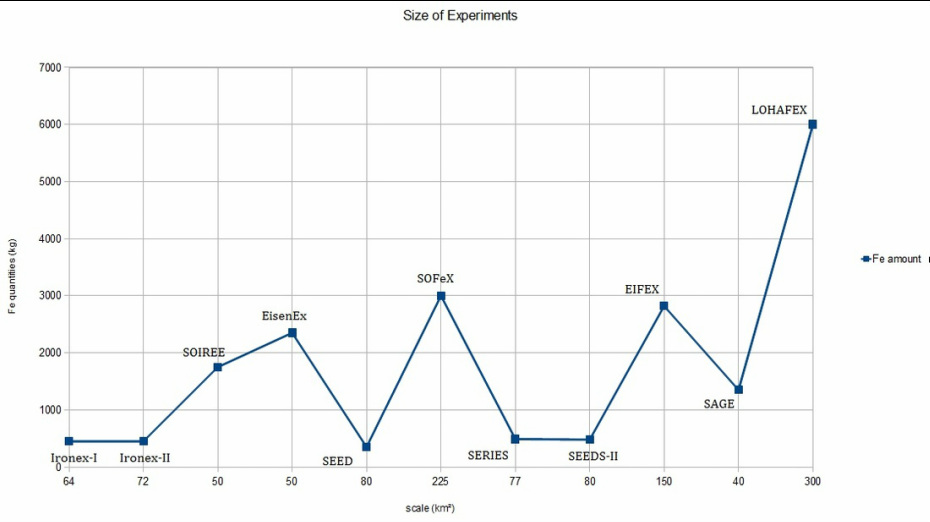 While an up and down trend can be registered, there was an tangible trend toward increasing the amount of iron thrown in the ocean. This can be explained by the need for re-fertilisation processes as iron disappeared quickly, stopping early any phytoplankton bloom. The same cannot be said for the scale of experiments, that are still categorized as "mezzo scale", excluding LOHAFEX. They can be compared to exceptional natural blooms occuring after dramatic events providing the limiting nutriments. However, the duration of the experiments evolved toward further extended time periods. Indeed, as science advanced, it became clear that models tested in laboratorial conditions cannot be extrapolated. The complexity of marine environment is discovered experiment by experiment and comprehensive monitoring. 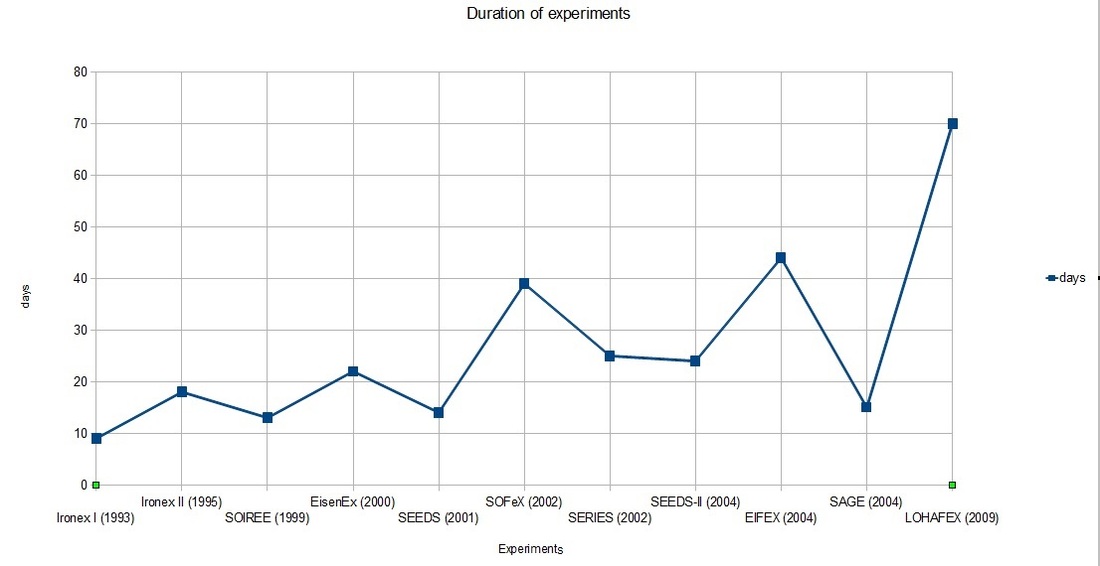 As duration and quantities of iron increased, the impact of these experiments on marine ecosystems also increased. While they mimic to some extend natural occasional blooms, they are nonetheless very disruptive. Since scientists still do not know well marine systems in their globality and still have no knowledge of possible consequences of their interference, nor the implications of existing side effects, concerns began to be voiced as to the real need and real legitimity of these experiences (ex. LOHAFEX). In front of potentially disruptive interferences, the "iron theory" was not only challenged as a geoengineering tool by practical data, but also on its conceptual groud, quetionning the very need for further trials.

What were the specific results?
These studies initially fertilized patches of surface ocean in high nutrient regions over the range 40 - 300 square kilometers. Full-scale demonstrations or deployments for geoengineering or fishery enhancement would, however, need to be very much larger, involving fertilization of around 10,000 square kilometers.


The bullets points below summarize findings from the small/mesoscale, iron addition experiments to date by institutional and independent researchers

- Phytoplankton responded to iron addition by an increase in photosynthetic efficiency and by altered rates of nutrient uptake.

- Effects on phytoplankton production and biomass were ﻿greater in shallower surface mixed layers﻿ due to the more confined depth range and, consequently, higher average light intensity experienced by the fertilized plankton.

- In most of the experiments, the dominant phytoplankton group changed, with a shift in community composition from smaller groups (cyanobacteria), via medium-sized phytoplankton (haptophytes), to larger diatoms.

- Diatoms usually dominate species composition after iron addition, the most abundant diatom species varied between locations and experiments. This may reflect regional species differences of initial ‘seed’ populations as well as competition under a range of ocean conditions.

- Bacterial biomass increased during most of the experiments (by 2-15 times). A transient increase in the stocks of small grazers, microzooplankton, was also reported from some experiments.

- The duration of the experiments was usually too short to allow larger zooplankton to respond. However, grazing increased in two experiments with high pre-existing stocks of medium-sized zooplankton (copepods), and played a major role in controlling the development of these blooms.

- There is, as yet, no information from experimental studies on responses further up the food chain (e.g. by fish).

These findings, as they come from very different experiences, do not constitute a homogenous data set and thus, may be controversial. The study of scientific publications on the subject provides further insights to the evolution of the subject.