What is Ocean Iron Fertilization?

How did the concept originate, how does it work, how do we do it?

In 1990, John Martin (oceanographer at the Woods Hole Oceanographic Institute) published a paper on the relationship of CO2 concentrations in the atmosphere and phytoplankton productivity in southern oceans during prehistoric times. He argued that phytoplankton productivity in the southern ocean was limited by the availability of micro-nutrients such as iron which hindered them from using the high supply of other nutrients (macro-nutrients, such as Phosphate and Nitrate).

According to his theory, during the last glacial maximum (LCG), atmospheric dust which “supplied” iron to the oceans might have led to high phytoplankton productivity drawing down large amounts of CO2. He suggests that this might be the explanation for low CO2 concentrations (200 particles per million (ppm)) and low temperatures during the last glacial maximum. The increase of CO2 concentrations from 200 to 280 ppm during the last inter-glacial (the Holocene) can be consequently linked to a smaller supply of atmospheric iron dust and thus a smaller drawdown of CO2 by phytoplankton. 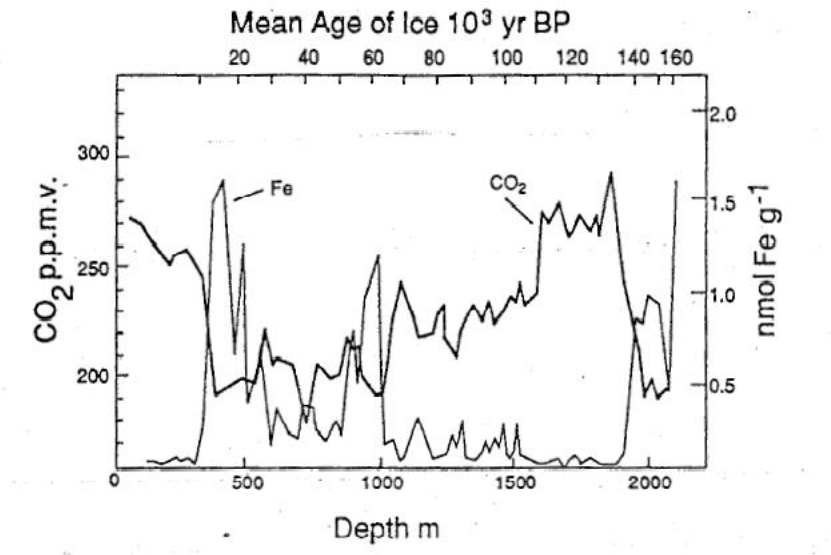 The graph above provided by Martin (1990) shows the inverse correlations between Iron availability and CO2 concentrations described during the last glacial maximum and the Holocene. Yet, this causal relationship is still being  contested. However, the hypothesis on the relationship of phytoplankton productivity, iron and CO2 concentrations remains the core theory of the Ocean Iron Fertilization idea.
The original publication of John Martin’s paper can be found here.
Where can you fertilize the Ocean?

Oceans have different characteristics and Ocean Iron Fertilization cannot be useful in any part of the oceans. Oceans, which are suitable to OIF, must have high levels of macro-nutrients such as nitrates and phosphates which are used by phytoplanktons to grow. In these high macro-nutrient regions, phytoplankton growth remains however limited because micro-nutrients such as iron, which are equally necessary for its development, are in short supply. These parts of the oceans are thus called High-Nutrient Low-Chlorophyll regions because, despite their huge supply of macro-nutrients, they only have a relatively low phytoplankton productivity. Regions with these characteristics cover approximately 20% of the global ocean and are located in the Southern, the subarctic Pacific and the equatorial Pacific Ocean.
These regions have been identified as having the greatest potential for Ocean Iron Fertilization. 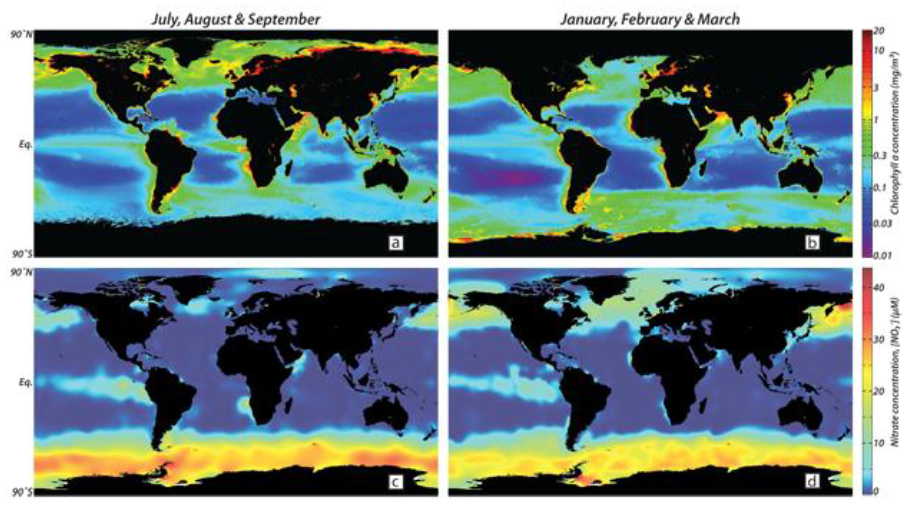 How do you fertilize the Oceans?

At least in theory, Ocean Iron Fertilization seems to be a very simple, an almost intuitive idea: oceans already function as the world’s largest carbon sinks by absorbing almost one third of our CO2 emissions. Following the Iron hypothesis, this potential can be enhanced by fertilizing HNLC regions with iron. The greater availability of iron leads to an increase of phytoplankton populations, an iron-induced phytoplankton bloom. 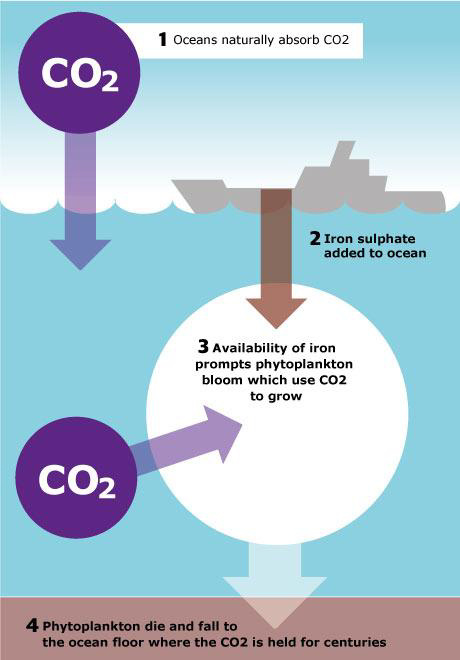 During its bloom, phytoplankton absorb increased amounts of carbon dioxide removing it from the atmosphere and drawing it down to the ocean upper layer. The idea goes on that once the phytoplankton dies or gets consumed by a zooplankton and the latter dies, the CO2 sinks down to the ocean floor where it becomes part of the sediments or at least sequestered in the very deep ocean from where it does not come back to the ocean surface and the atmosphere for at least one century.
This is in very simplified terms the general idea behind Ocean Iron Fertilization. Of course, the reality is far more complex as will be explained in the following parts.
Ocean Iron Fertilization as a method of geoengineering:

Since the 2000s', Ocean Iron Fertilization has been categorized as one of the methods of geoengineering, which we define as the “the deliberate large-scale manipulation of an environmental process that affects the earth's climate, in an attempt to counteract the effects of global warming”. The main distinctive features of geoengineering are its massive scales of time and space and its voluntary nature.

Geoengineering is divided into two types of techniques:


Solar Radiation Management (SRM) includes techniques which aim to reflect a small proportion of the Sun’s energy back into space, counteracting the temperature rise caused by increased levels of greenhouse gases in the atmosphere. Carbon Dioxide Removal techniques aim to durably remove carbon dioxide once it has been emitted to the atmosphere. 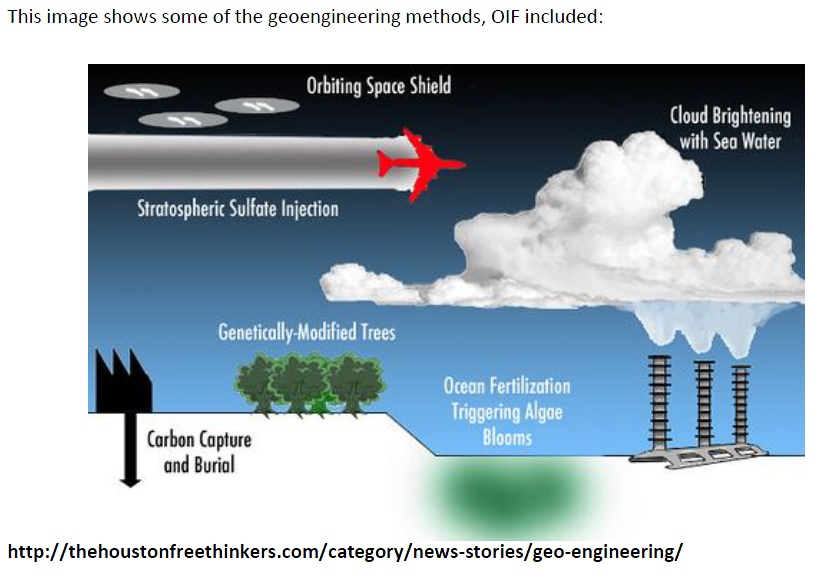 Next page: Evolution of the controversy