Evolution of scientific publications on OIF﻿﻿

An overview of the dynamics of the scientific community over the years.

The selected scientific articles are taken from  scentific corpus referenced by Scopus. While it does not cover the entire scientific articles published on Ocean Iron Fertilisation, it provides however a good understanding of what happened in the institutional scientific community over the years. This set of document is there to provide an overview of the subjects touched upon and the dynamics of controversy development.

Based on the set of articles referenced by Scopus, this graph was generated in order to have a broader overview of trends in publications of articles according to their source journal. 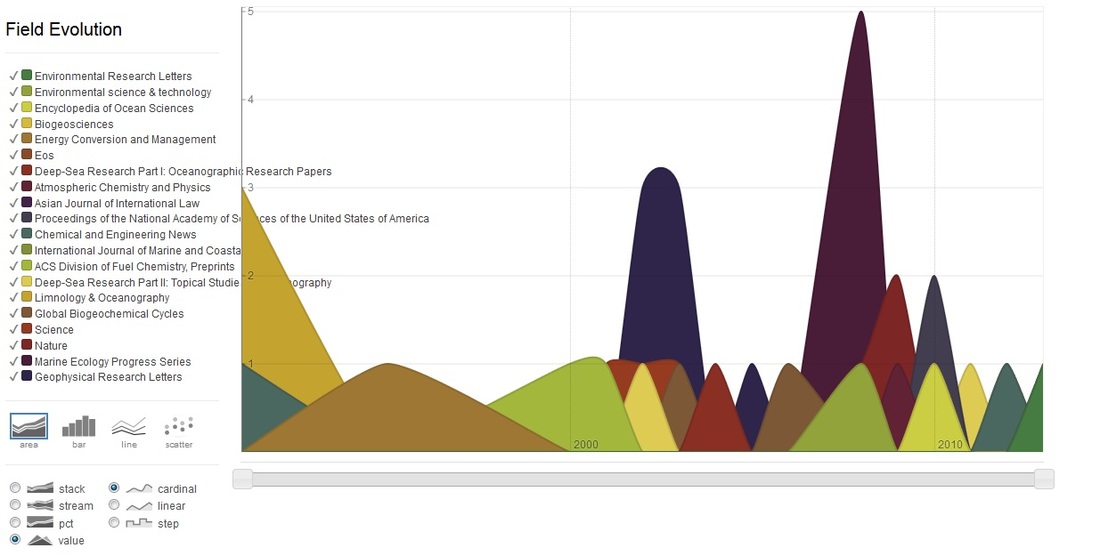 The first observation to be highlighted is the presence of two different distribution patterns before 2001 – 2002 and after. Indeed, the first period is dominated by four journals, that, apart from “Chemical and Engineering news” do not publish any more in the following years. Studying their content, “Limonology & Oceanography” has a rather sceptical stance regarding ocean iron fertilisation. Indeed, it highlights the limits that ocean iron fertilisation encounters regarding carbon uptake and its biochemical consequences for marine ecosystems. The rest are much more enthusiastic regarding this question, extrapolating earlier laboratory models and speculating on further possible commercialisation, biomass production for biofuels, even though they acknowledge some further research should be carried out.

The second period looks very differently, mainly because Limonology & Oceanography lost their monopoly on this question and were replaced  “Geophysical Research letters” as the main contributor of data and reflection in this field.
These journals publications are not very numerous (one or two papers per year). The two peaks observable on the graph are closely related to events that happened that year and the analysis of the articles further assesses it. It is symptomatic to note the apparition of environmental journals along with marine and oceanographic journals in the second half of the 2000s, as well as journals specialised in international and marine law. The scope of the subjects broaden, illustrating the evolution of the debate, people looking for normalisation of ocean iron fertilisation.
The study of the content of oceanographic articles shows they are now more focused on data provision, analysis of past experiments and discussion of various marine models according to the new elements provided by in situ fertilisation experiences. “Science” and “Nature” as more general journals, provide space for a more critic stance on ocean iron fertilisation, usually publishing articles of scientists summarizing their works and their critics on OIF experiments, giving these journals a more “CON” stance against ocean iron fertilisation as a tool for large scale carbon sequestration/geoengineering practices. Law-oriented journals explore more regulation and governance issues and the latest article from “Asian Journal of International Law” focus on state liability and the new governance regime that emerges with the Convention on Biodiversity, London Convention/London Protocol framework and UNCLOS regulation. Overall, against the first period, OIF is now in a process of being tested and criticised, iand in a process of being regulated. 2001 and 2002 seem to have been years of transition from theory to practice. 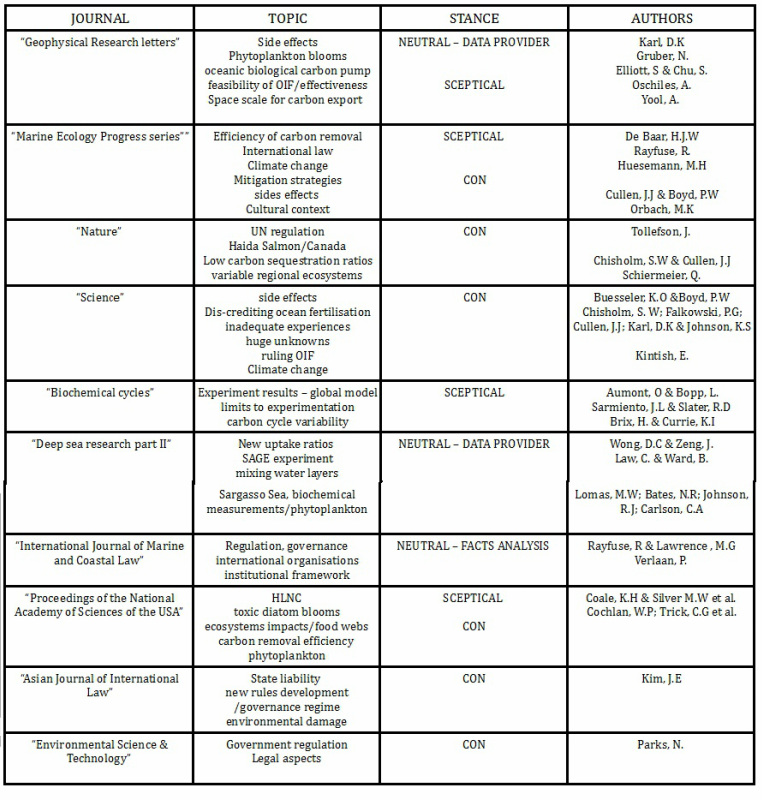 The present graph illustrates the distribution of cited journals over time. It helps to identify what is the weigh of journals that were published and if there was a global shift in scientific publications, compared to the previous one. 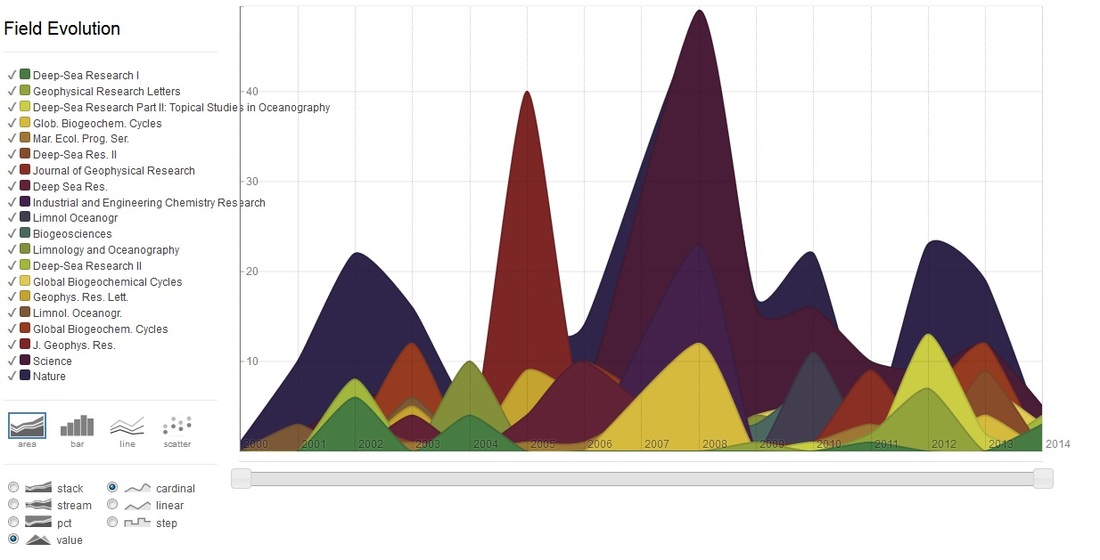 There is no wonder to find again the 2008 peak. "Nature" and "Science" are the most cited journals, which can be easily explained by their wide coverage and reputation of contributing authors. While “Limonology and Oceanography” seemed to have disappeared from the controversy, there is this a substantial and ongoing presence though subsequent quotations. Since these are publications of a laboratory carrying its own experiences  with a more critical stance on OIF since the beginning, it can still be considered as an influential actor. It may say something about the current orientation of scientists working in this field.

The big absent journals are the ones that were dominant before 2001 – 2002 and had a “PRO” stance. While we can see a continuous trends of quoting very quantitative articles, they are nonetheless written with some dose of scepticism. Overall, from what graphical analysis showed us, it is clear that the scientific community is gaining knowledge regarding marine sciences, but this new knowledge did not provide the expected backing in facts to the developed theories in the late 80s and 90s. 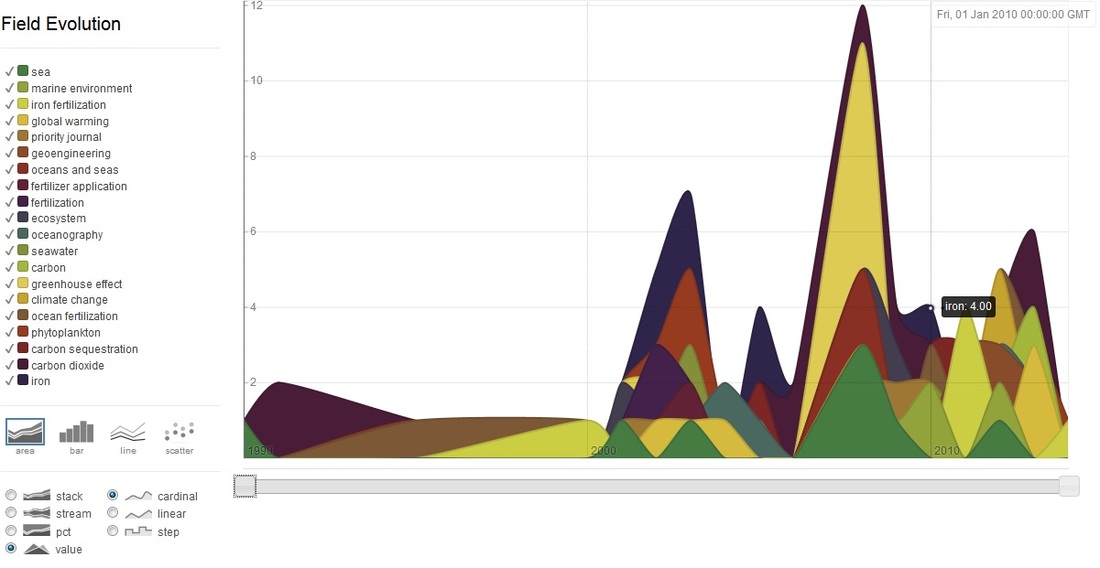 The same is done for the Term distribution that follows a similar pattern. 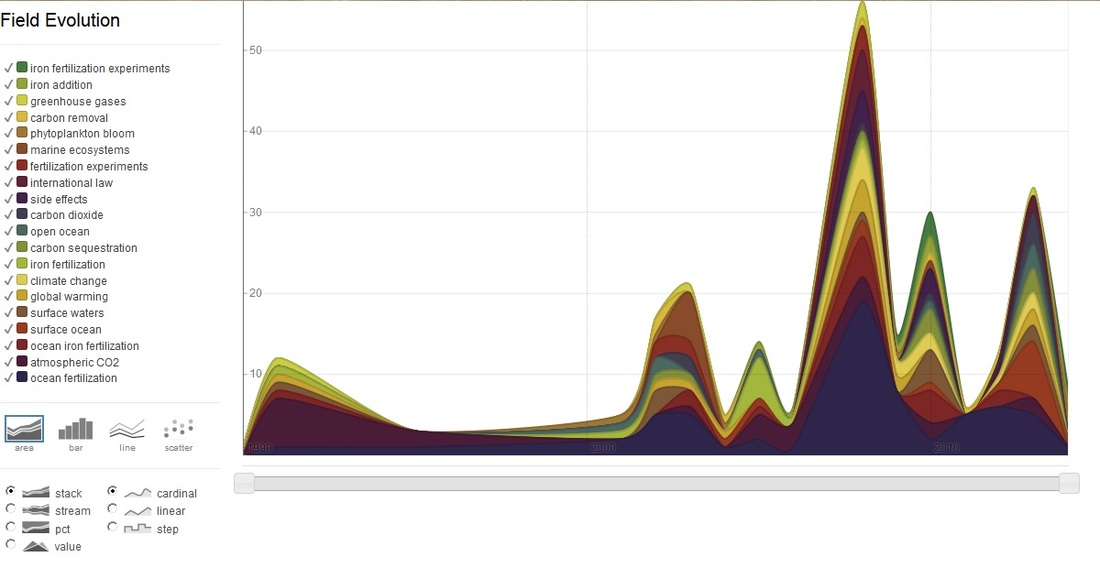 Some substantial correlations have to be highlighted: The presence of the keyword "climate change" in 2002, 2008 and 2013 is related to IPCC's publications (mentionning the existence of ocean iron fertilization in its Third Report, 2001; and the possible use of it as a mitigation tool in its last report, 2013). Overall, the peaks are consistent with these publication timeframe. The 2008 peak can be related to the Plakntos' plans to carry a large scale fertilization experiment, that has taken place. That is a time of serious concern around marine ecosystems. The appearance of the keyword "geoengineering" is also substantial, while the use of "oceanography" disappeared at that time. This is a sign of a shift in the controversy from an oceanographic focuse to an now inherently political one, due to the IPCC reports and the turning point that was 2007-2008. The fact that ocean iron fertilization could be applied at a commercial scale changed the framing of the debate.
New appearances are not that obvious at the first glance, but they add a new layer in the debate that is, in this corpus of articles, mostly focused on scientific articles. It is interesting to notice that "side effects" and "international law" figures in the top 20 terms used in the corpus. While the presence of the "side effects" term is not surprising as more articles were published as new data were released regarding carried experiences, the appearance of the term "international law" is worth noticing. Such a penetration in a field that may be seen mostly focused on biochemistry or biological processes indicates that, to some extend, the scientific community was impacted by a broader debate in another sphere, focused on other issues and consequences.  Far or not from the epicentre, scientists were hit by the waves of a debate that goes beyond oceanographic quantitative issues of diatom blooms or carbon uptake ratios. Some of them clearly got involved, as illustrated in the table previously shown, defending a position based on experimental, technical outcomes, sometimes embedded in a complex framework of subjective values.
While the number of publications, diversity of journals and keywords distribution say something about the intensity of the debate, it is also worth to look at the distribution of subjects. It was already said that quantitative works are more quoted than general ones but it does not say where is the locum of the debate nor if some countries had a specific stance on it.
A qualitative analysis of the articles before 2001 - 2002 and after illustrate in a different way, the evolution and the intensity of the debate.
The comparison between these two maps of keywords used by countries adds to the analysis. In the period 1990 – 2002 that was separated from the rest, the keywords are mainly these of oceanographic research, illustrating the state of advancement of each country's knowledge on the subject and their respective focus. The United States, being the biggest cluster, have an entire cloud of words of their own. They are mostly focused on the technicalities of ocean fertilisation, and the presence of “Greenhouse gas effect” only in their cluster is surprising but can be explained by the more advanced state of research in American laboratories and the lag other have to catch up.
It is symptomatic to see that no mention is made of research, of legal or economic issues. In the first period, the clusters are defined to some extend, focus areas of interest and level of advancement in knowledge.

In the second map, the network is more messy as things complicated themselves. It is surprising that “Greenhouse effect” shifted to the cluster constituted by Norway, South Africa, India, Brazil, Spain, that can be defined as a “green concern” cluster.
Another specific cluster can be identified around Australia, focused more on the marine system, defining thus the “marine” cluster.
A “phytoplankton” cluster is also observable around Bermuda, where long term monitoring was done on patterns of development of phytoplankton spices.

The other clusters are more intertwined with one another and is a sign of a bigger complexity. Research advancing, new issues emerged. The carried experiences were not made by purely national teams but instead gathered scientists from various countries. Therefore, publications are usually the outcome of an international cooperation, and new concerns are voiced the same way. “Global warming”, “climate change”, “geoengineering”, “marine environment” are items that are incorporated and orient/influence the debate. The presence of these terms signals an opening up of the debate to other fields that are not directly related to oceanographic studies.

To go deeper into details, the following map shows the terms used on a country basis, to see whether the distribution according to keywords matches the actual message conveyed. 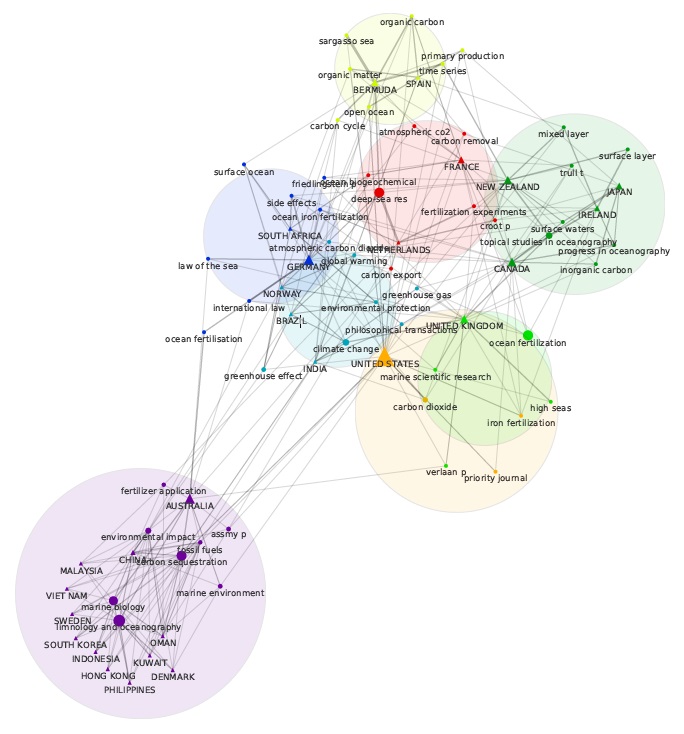 The "term/country" analysis exacerbate the observed situation using only keywords. Apart the purple cluster that still is the same compared to the earlier analysis, countries are closer to one another, linked by a bigger amount of common term used that are consistent with their previous keyword position. It is worth to notice the appearance of terms that were not at all present before: "law  of the sea", "international law", "side effects", "environmental protection" as well as their distribution (ex. Germany's position linked to law terms can be linked with LOHAFEX experiment). This gives a further dimension to a subject that still has not been clearly defined but clearly has lost the initial enthusiasm.
Next page: Controversy Intensity